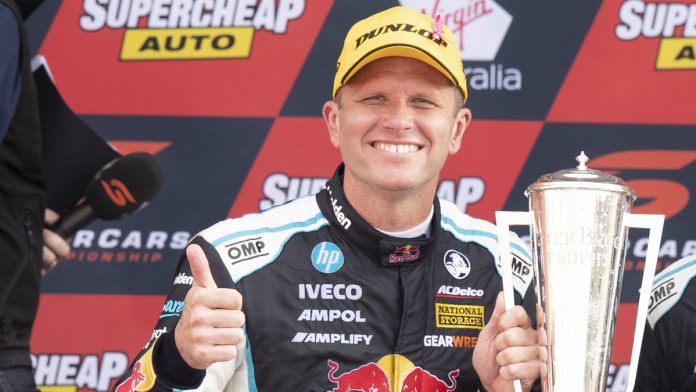 Garth Tander is set for an all-encompassing apprenticeship on Supercars’ television broadcasts this year, while Craig Lowndes will be “unleashed” in a new role.

They are the key messages from Supercars’ Head of Television Nathan Prendergast, who will juggle a raft of new talent in a heavily revised on-air lineup announced this morning.

Reigning Bathurst winner Tander’s inclusion is the headline element as it appears he’s being groomed for a leading commentary role.

The 43-year-old shone in limited TV appearances during his full-time Supercars career and is making a push into broadcasting now that his driving duties in the category consist solely of Bathurst.

This year Tander will rotate through duties on support category commentary, including the Dunlop Super2 Series, reporting from pit lane and presenting various colour stories.

But it’s the prospect of a role as a lead commentator that is most intriguing.

“Later on in the year at appropriate and scheduled events, Garth will get some seat time in the main commentary role,” explained Prendergast.

“But his key role is pit lane and support commentary and a bit of a growth and development role in 2021.”

Prendergast is full of praise for Tander’s on-air abilities, although stressed that incumbents Neil Crompton and Skaife are safe – for now.

“No one is in a hurry to push Crompo or MS out of their roles, but we certainly always do need to be looking at what’s next and what the future does look like,” he said.

“I’ve always rated Garth Tander. He originally did a commentary call with Aaron Noonan back at the Bathurst 12 Hour in about 2007, he did some post-produced commentary and straight away I recognised he was quite a talent.

“The aim for this year with Garth is two-fold,” Prendergast added. “He needs to learn the ropes, [and] gain the respect of the teams.

“There’s no hiding behind the fact that he’s a Triple Eight driver and there will be a lot of people that may raise some concerns about that.

“[But] Garth is a true professional. He’s an extremely talented presenter and driver. He’ll bring a lot to this coverage.”

Fellow Triple Eight co-driver Lowndes meanwhile made the move onto the broadcast in 2019, immediately after his full-time driving career ended.

He was initially brought in to provide expert comments on the hosting desk but was also put in pit lane last year due to the changes brought about by the COVID-19 pandemic.

Prendergast confirmed Lowndes will no longer be in pit lane this year and will also appear less on the analysis panel.

“We’re going to unleash Craig to do what Craig does best, and that’s drive race cars,” he said.

“Craig is going to do all of our track previews. He’s going to drive other people’s race cars.

“He’s also one of the few guys that has been at every single race meeting bar his overseas stint in 1997 since 1994.

“We’re going to use Craig to unlock a bit of the vault, a bit of the archive. He’s going to be delivering a lot more content that is pre-produced and post-produced.

“History of the track, history of people, history of cars, track reviews… We’re going to utilise Craig to do the things that he loves.”