Home News FEENEY TO RUN #888 FOR TRIPLE EIGHT IN SUPER2 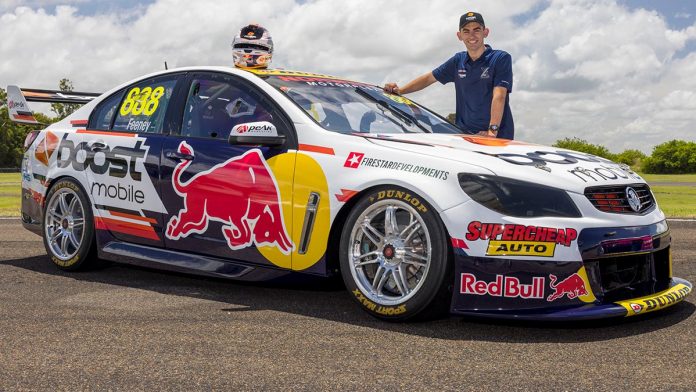 TRIPLE Eight Race Engineering has revealed the liveries that Broc Feeney and Angelo Mouzouris will campaign in the Dunlop Super2 Series in 2021.

New recruit Feeney will race in a livery reminiscent of the team’s ‘main game’ cars of Jamie Whincup and Shane van Gisbergen, with major backing from Red Bull and Boost Mobile.

The car will also race under the #888, which marks the first time Triple Eight has used its signature number in the Super2 Series and the first time the number has been used in full-time Supercars competition at any level since the retirement of Craig Lowndes at the end of 2018.

WHAT WE KNOW SO FAR: 2021 Dunlop Super2 Series Entry List

The 18-year-old was the youngest winner of the Super3 Series in 2019 and moves across to Triple Eight for his second season of Super2 after an impressive debut season with Tickford Racing last year, culminating in his Supercars Championship debut alongside James Courtney at the Bathurst 1000.

“To see ‘Feeney’ under the number 888 with Red Bull, Boost Mobile and Supercheap Auto as the sponsors is just surreal to me,” Feeney said.

“Growing up as a kid in sport, you dream of one day being associated with Red Bull, so to have them on my car, suit and helmet is a dream come true for me and an opportunity that I look to capitalise on.

“I cannot thank Peter and Jason from Boost Mobile Australia enough for giving me the opportunity and to be able to work with such a successful brand. They gave me a big break last year and I look forward to continuing to work with them.”

Mouzouris continues with the striking #10 pitbox.io colours for his second tilt at the second-tier series with Triple Eight.

The 2019 Australian Formula Ford Series winner gains additional backing from Over The Way wines for the 2021 season.

“It was a tough off-season to get the funding together for 2021 but we made it, and I am even more determined to make a step forward this year,” Mouzouris said.

“There were some positive learnings from last year and I know what I need to do this year to race at the front.

“I’d lastly like to give my thanks to Craig and Lara Lowndes for supporting me throughout last year and now moving forward into this year. Together with the Super2 team I’m looking forward to having a real crack.”

The 2021 Dunlop Super2 Series season gets underway at the Repco Mount Panorama 500 at Bathurst on February 24-26.