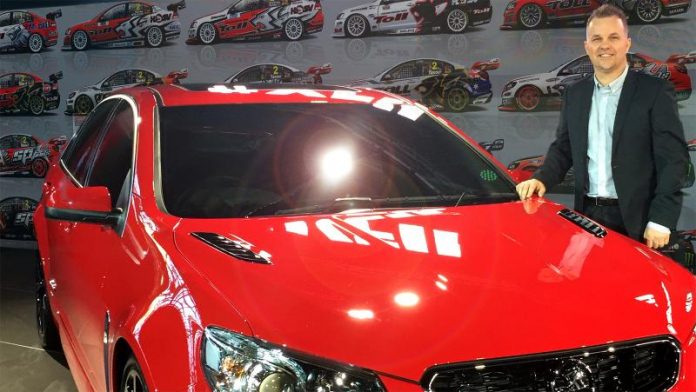 IF you’re a die-hard Holden fan or simply laid eyes on a Commodore recently, then there’s a good chance you’ve witnessed the hard work of Peter Hughes.

Peter has been responsible for designing some of the most successful cars in the manufacturers’ recent history, having spent the last 20 years as the Exterior Design Manager at General Motors Design Australia.

A good friend of ours here at V8 Sleuth, Hughes has also penciled some of the greatest racing liveries of all time, having dedicated himself to creating the artwork for a plethora of Holden’s racing cars over the last two decades.

Having first designed the Holden Racing Team and Holden Young Lions liveries in 1997, Peter has gone on to design artwork for nearly every Holden team since and is now designing artwork too.

We recently teamed up with him on a limited run print celebrating the fantastic Torana A9Xs that competed at Bathurst from 1977 to 1979.

V8 Sleuth spent five minutes with Peter recently to learn more about him and his interesting work.

How did you get involved in developing racecar liveries?

In the early 1990s my boss was Mike Simcoe, who was responsible for the VL Walkinshaw Group A and the iconic liveries that went with it. From ’92-’95 I did all the sponsor movements for the team as Mike knew I had a love of motorsport. In 1997 HRT and Holden wanted a fresh look so the responsibility was given to me. In ’98 I did Perkins’ first VT as well, and those three cars were really the start of it all.

What is you interest in motorsport?

My interest in motorsport came from my father, a semi-professional rally driver in the 70s. Even at the age of four, I was surrounded by racecars and always attended the start of his big rallies. By the time I got my job at Holden in 1990, who were heavily involved in racing at the time, my two passions had collided, design and motorsport.

Historically you’ve done liveries for HRT, what other teams have you created liveries for?

Nearly every Holden team at some point has come across my path through my close relationship I have with Holden Motorsport; HSVDT, Perkins, PMM, GRM, Tasman, Kellys, Tekno. More recently Triple Eight, BJR and LDM…did I miss any?

Why did you start creating motorsport artwork after hours?

During the height of Holden’s involvement with many teams, it was just unfeasible to take up so much of my core work hours on motorsport. I didn’t want to let it go as I loved it, but something had to give, so the small teams ended being ‘homers’ on a regular basis. From that spurned the prints I started to create for a bit of fun on the side.

Can you briefly explain the process you go through to create your artwork?

In 1990-2007 it was all done by hand. Free hand sketches, markers, pastels, and taping up stripes on racecars for the painters to make templates were the norm. I still remember taping up Larry’s first VT Commodore at Moorabbin. It is so different these days. There is still something nice about a painted racecar, rather than a vinyl wrap of today. I’m showing my age I guess, I still like race numbers on doors too!

Because modern liveries are designed over a CAD model, it is extremely accurate, so the decal guys have no problem placing it over the race-car with tremendous accuracy…the days of going to the race teams and taping on the stripes are long gone sadly.

What’s in the future for your artwork?

I think the ‘motorsport art’ avenue for me needs to be fun and inspiring. I treat it as more of a hobby rather than a job and I want my art to express the detail and passion I have for motorsport and particularly Holden. Having motorsport fans truly appreciate what I do is tremendously rewarding.

The next big step is to try to take my modern techniques and apply them to some of Holden’s glorious motorsport heritage.

I’ve done a lot of tribute prints on the modern racecars celebrating the past, but imagine that level of detail on the actual Holdens from the 60s, 70s and 80s. That is the challenge and a big ‘work in progress’. Stay tuned Holden fans!