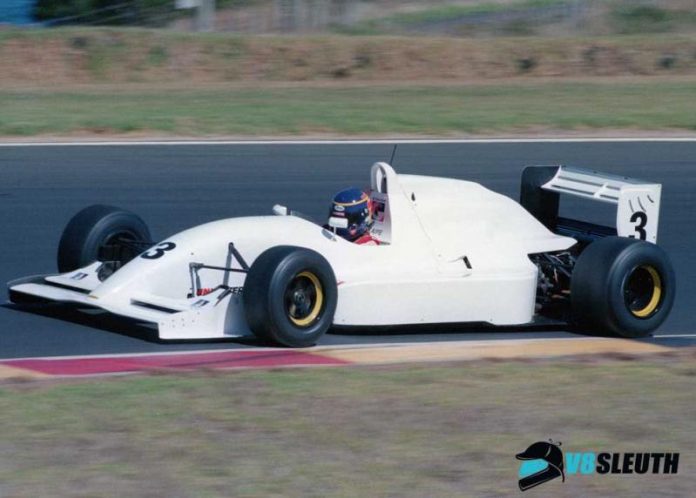 One-time run, now on the other side of the world!

MARK Skaife was a guest recently on the V8 Sleuth Podcast Powered by Holden – listen to the episode here – and we discussed very briefly his Formula Holden open wheeler racing cars of the early to mid 1990s.

It prompted a range of V8 Sleuth Podcast listeners and website readers to get in touch to tell us that his 1991 spec Lola – which he ran in Winfield colours to win the Gold Star – lives on in New Zealand.

Now, this one we already knew about, but it was his 1993-spec Lola that he raced only once – at Phillip Island in 1995 – that we were quite keen to hear more about too.

And indeed we have!

The ex-Skaife Lola T93/50 – which had been a Heinz-Harald Frentzen car in the Formula Nippon series in Japan – is indeed still racing, in Ireland!

Podcast listener Daryl McGrath got in touch all the way from Ireland and connected us to car owner John Daly, who was chuffed to hear that the V8 Sleuth team was interested in his racing stead, which has been in Ireland for nearly two decades since its Formula Holden life came to a close.

Daly raced on the weekend at Mondello Park in the BOSS Ireland series (Boss stands for Big Open Single Seaters) competing for the Leinster Trophy – an award won in the past by none other than Ayrton Senna and also some bloke called Mika Hakkinen.

“We just finished our season yesterday and I had her out in the worst conditions of rain; the visibility was terrible and I nearly did a wheel-to-wheel as a guy stalled in front of me,” Daly told V8 Sleuth.

“But we got home all in one piece and she still has the Holden (engine) in her and running like a watch.”

The car today sits in a Castrol Lotus livery, akin to that carried by the Formula 1 Lotus team in the same year the ’93 Lola was built and carried in period by Johnny Herbert, Alex Zanardi and Pedro Lamy.

Speaking of Lamy, read our story here on his forgotten V8 Supercar test.

Skaife raced the 93-spec Lola once at Phillip Island in early 1995 in the Australian Drivers Championship round that supported that weekend’s ill-fated Super Touring round in which Gregg Hansford lost his life.

The car proved to be problematic and he finished second in each of the two races having been unable to test the new car due to a shortage of funds, parts and his health given he’d been sidelined by his huge crash at the Winfield Triple Challenge in the team’s new model Commodore VR.

The Formula Brabham (as the class was then known) remained parked for the rest of 1995 as Gibson Motorsport concentrated on its V8 program with no sponsorship for the Lola.

Our Formula Holden chassis history sources tell is this car eventually was raced by Mark Noske in the 1997 Gold Star Championship, below, and in later years by Roger Oakeshott and Ash Lowe (owned by Derek Pingel) in 2005, by which time the category was known as Formula 4000.