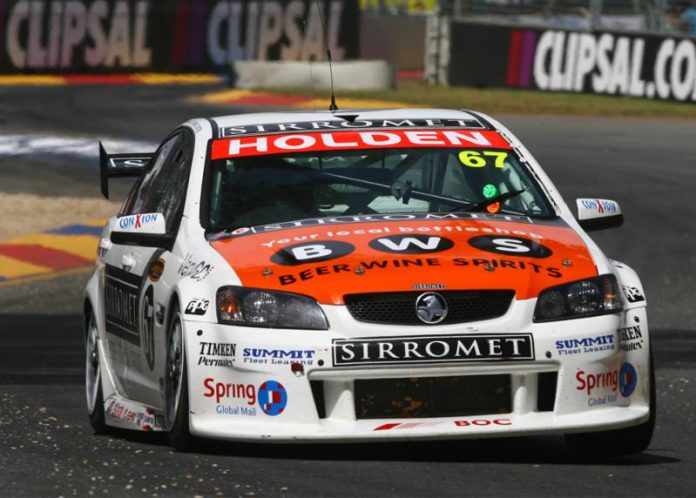 PHILLIP Island is set to host a big weekend of motorsport when the Supercars Championship rolls into the Victorian venue next weekend along with a growing field of Kumho Tyre V8 Touring Car Series competitors.

One of these is Gold Coast-based driver Stephen Coe, who will make his Kumho Series debut at the picturesque circuit aboard an ex-Paul Morris Commodore.

The VE Commodore, named Hercules, was first used by Paul Morris at the 2007 Clipsal 500 in Adelaide and hit headlines later that year when he went rolling down the fence at Pukekohe following contact with Brad Jones.

In fact V8 Sleuth interviewed the photographer who captured these great shots of the Pukekohe incident – Read here!

Incredibly the car suffered only minor damage and was used for the remainder of the season by ‘The Dude’ before eventually finding its way into the hands of Coe in 2013.

The 62-year-old used the car to compete in the Queensland V8 Series and various state-level events before running at Bathurst in the Combined Sedans category supporting the 12 Hour.

Coe has been a competitor for many years in both drag racing and circuit events and says retirement has allowed him to further enjoy the sport.

“I remember jumping the fence as a kid to watch races at Sandown and loved it since then,” he says.

“Many years ago I also did a bit of drag racing but now that I’ve got more time I wanted to enjoy circuit racing.”

The step up to the Kumho Series for 2018 comes from the Queenslander’s desire to race at new circuits and experience a more competitive field.

“I was enjoying using the car in the state rounds but I wanted to have a go on some other circuits and against a full field of V8 Touring Cars,” he says.

“There’s a lot of camaraderie in the motorsport community and in the Kumho Series, so it’ll be nice to race against people who really enjoy the sport and have similar equipment to us. It should be a lot of fun and hopefully we’re able to run at least in the mid-pack!”

Coe will run the PMM-built Commodore from his own workshop on the Gold Coast and plans to run the Kumho Series rounds at Phillip Island, Queensland Raceway and Tailem Bend.

V8 Sleuth is proud to once again partner with the Kumho Tyre V8 Touring Car Series for 2018 with a solid field set to kick off the season at Phillip Island from April 20-22.

The series will race at four Supercars Championship events in 2018 as well as the Australian Muscle Car Masters at Sydney Motorsport Park in June – check out the full calendar here.