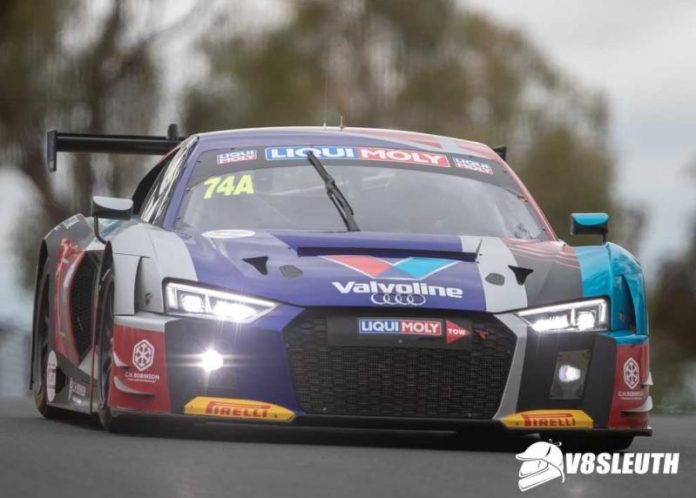 TAKE a bow, Christopher Mies. The Audi GT star has just set a new outright lap record of Mount Panorama, and the first official lap time of under two minutes.

Taking part in the Challenge Bathurst event this weekend, the German completed a lap of the 6.213 kilometre circuit in 1m59.2910s, over two seconds faster than the previous mark set by Shane van Gisbergen during the 2016 Liqui Moly Bathurst 12 Hour.

A two-time Bathurst 12 Hour winner and the 2015 Australian GT Champion with Jamec Pem, Mies (pictured above during the 2018 Bathurst 12 Hour) was piloting one of the factory Audi Sport Customer Racing Australia entries that will likely tackle the 12 Hour next February.

He shared the car with Garth Tander during the day, the Supercars star and Bathurst 1000 winner setting a 2m00.3310s lap in a subsequent session.

Although conforming to GT3 spec, the Audi was running without balance of performance restrictions, illustrating just what the exotic GT machines are capable of around Mount Panorama.

“I dreamed about this for years,” Mies tweeted.

“Being on my favorite track in a GT3 car with no restrictions and no weight … this shows you how fast these GT cars can be.

“Thank you Audi Sport team MPC for fulfilling my dream. Also big thanks to Garth Tander for sacrificing your sessions before to prepare my run!

“My heart rate didn’t go below 160 in this lap, I’m still shaking writing this…”

Now, I know what you’re going to say next: ‘It can’t be an official lap record! It wasn’t set during a race!’

Challenge Bathurst is a CAMS Speed event and an official Supersprint competition, allowing Mies’ lap to be officially classified as the new outright lap record for Mount Panorama.