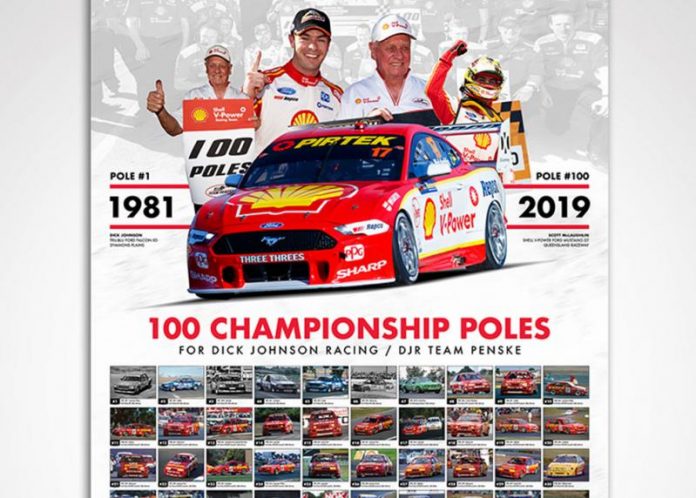 SCOTT McLaughlin’s pole in Race 19 of the 2019 Virgin Australia Supercars Championship at Queensland Raceway was a special one given it was the 100th championship pole for DJR / DJR Team Penske in its history.

The team made its championship debut in the opening round of the 1981 season at Symmons Plains in Tasmania with Dick Johnson at the helm of his famous Tru-Blu Falcon XD, built after the disastrous ‘rock’ incident at Bathurst the year prior.

Johnson claimed his first championship pole position (and first race victory) that weekend, the first of 100 poles for the team, which became DJR Team Penske in 2015.

Fans of the team can now celebrate this historic milestone with this huge limited edition photographic print produced by Authentic Collectables in association with the team at V8 Sleuth.

This is an unbelievable print which features each and every one of the 100 pole position cars in the championship over the course of the history of the team including details about the car, driver, year and race where each pole position was claimed.

Measuring a massive 594mm X 1000mm, this print is 1 metre tall, printed offset in an individually-numbered limited edition on 250gsm matte paper stock and officially licensed by the team.

As an added bonus, we have also been given permission to replicate the ‘100 Poles’ poster that was used by the team to celebrate the achievement at the race which will be included with each print ordered – making this a very special collectable set.

Pre-order your copy here or enquire at your local stockist.