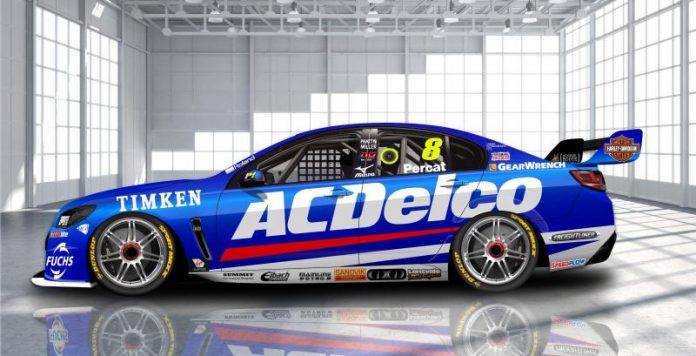 Yep, it’s another new set of clothes for Nick Percat’s #8 Commodore next weekend!

THE rotating sponsor list for the #8 Brad Jones Racing Commodore of Nick Percat will continue next weekend in Sydney with ACDelco on board for the event.

Percat’s car will appear in the ACDelco colours today at Winton for the team’s second test of the year given their first attempt at the day was postponed two months ago due to bad weather.

ACDelco is the premium supplier of GM original equipment, providing a wide range of products to the automotive replacement parts industry.

“ACDelco and the team at BJR have had this livery in the pipeline for quite some time, so it’s great to finally be able to show it off,” says Percat, who ran with Dunlop Super Dealer backing in the last round in Queensland.

“It’s great to have the support of ACDelco and it’s another standout scheme to add to the #8 Commodore collection this season. You can really see the shimmer of this blue PPG paint standout and shine, yet another awesome livery you won’t miss on track!

“We’ve been looking forward to our test day for quite some time. Everyone knows we’ve been keeping busy with repairs that the time to develop parts and move forward has been limited.

“There’s plenty we want to try out today so the team will be making the most of it. Hopefully we can show some good strength and speed by the time the Endurance Cup starts; which isn’t far away!

“I look back a few rounds ago at Darwin where we finished on the podium and want to be back up there again; I know the team are all eager to get back on that level.”