Home News PERKINS COMMODORE BACK ON TRACK AT WINTON 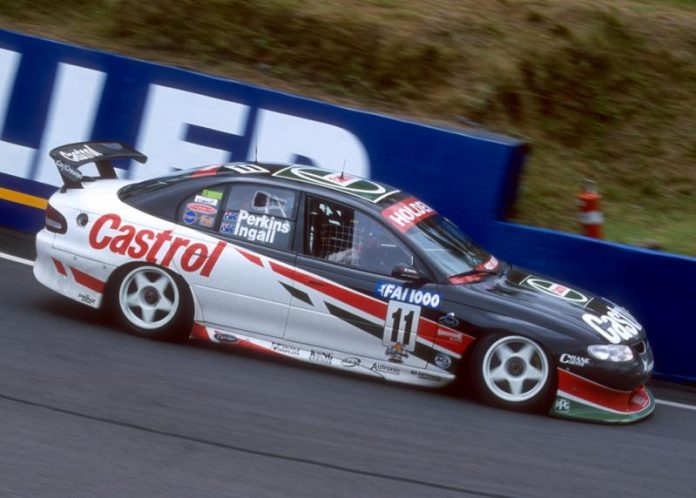 THE Kumho Tyre V8 Touring Car field has been further bolstered ahead of the second round of the series at Winton thisweekend with the addition of an ex-Larry Perkins Commodore to the entry list.

Dubbo-based business owner and part-time racer Sean Fardell will return to the Kumho Series for the first time since 2011 aboard the Commodore driven by Perkins and Russell Ingall in the 2000 FAI 1000 at Bathurst.

The Winton event will be the first time the car has run in national competition since 2014 when Fardell raced the car in the non-championship V8 Touring Cars round at the Sydney 500.

Fardell appeared in a round of the Kumho Series in the car in 2011 and also drove the chassis – which now appears in its 2000 livery complete with black bonnet – in the Heritage event at the Wakefield Park Shannons Nationals round in 2012.

The car was built new in 2000 and debuted as the #11 Castrol Commodore VT at the Queensland 500 with Perkins and Ingall driving before the duo rounded out the year aboard this car at Bathurst.

It became Ingall’s #8 Castrol Commodore for the 2001 season with the two-time Bathurst winner taking it to victory in the opening race of the Hidden Valley round before he swapped to a new chassis at Calder Park.

In 2002 it moved into the Konica Series as the #64 Wynn’s Commodore VX and was used by Paul Dumbrell to dominate that year’s series, taking 12 wins from 15 starts and clinching the title.

Adam Wallis acquired the car in 2005 and prepared it for the 2006 Nurburgring 24 Hour race where he partnered with Mal Rose, Kevin Burton and Anthony Robson – unfortunately their campaign only lasted three hours after Wallis crashed while running 40thoverall.

The team returned to ‘The Ring’ in 2007 and finished the 24-hour classic 64thoverall in the field of 156 finishers.

Wallis returned the car to Australia for the inaugural year of the V8 Touring Car Series in 2008 and used it to compete in the first and last rounds of the series at Mallala and Sandown respectively.

He returned to the series full-time in 2009 and claimed the overall series title with the car before Fardell purchased it in 2010.

A 20-plus field of Kumho Series competitors will line up for round two at Winton with the action getting underway on May 18-20 as part of the Winton SuperSprint, the sixth event of the Virgin Australia Supercars Championship.

V8 Sleuth is proud to once again partner with the Kumho Tyre V8 Touring Car Series for 2018 with the field competing at four Supercars events and the Muscle Car Masters at Sydney Motorsport Parkthis season.

Check out the full season calendar and series details here.