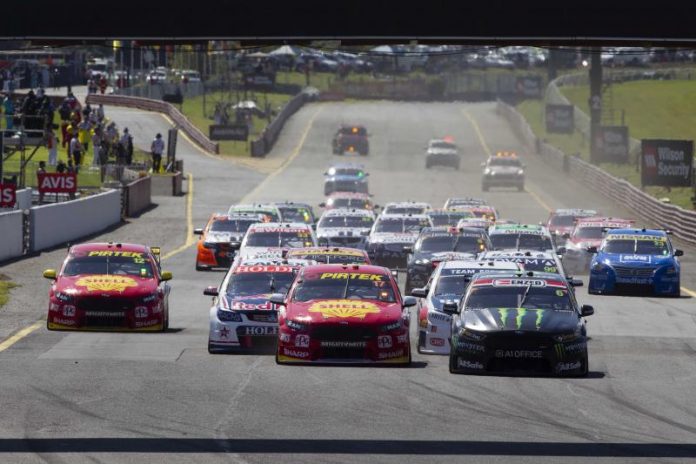 THE start time of this year’s Sandown 500 is due to leave a slightly shorter time window for the full 161-lap distance of the historic race to be completed within.

The Melbourne endurance classic is due to start on Sunday September 16 at 1.20pm, five minutes later than the scheduled 1.15pm start time of last year’s race.

The time certain finish of one lap after 4.48pm is unchanged, leaving a window of approximately three hours and 33 minutes for the race to be run within.

The fastest full distance, 161-lap Sandown 500 was run in 2012, Craig Lowndes and Warren Luff winning with a race time of 3hr19m14.8927-seconds in a race that featured two Safety Car periods for a total of five laps affected by the SC.

The last two Sandown 500s have reached time certain finishes well short of the full 161 laps due to first lap crashes at the end of the back straight and long delays while damaged barriers were repaired.

The 2017 race only featured 125 laps of racing (387.5-kilometres) after a one hour delay due to repairs to the wall at the esses approaching Dandenong Road Corner after a first lap accident involving Taz Douglas’ Lucas Dumbrell Motorsport Commodore.

Garry Rogers Motorsport young gun James Golding crashed at the same spot on the opening lap of the 2016 race, causing a red flag (the first in Sandown 500 history) and delay while the barrier was repaired. A total of 143 laps (443.3-kilometres) were completed in that race.

Steps have been taken to lessen the chances of such delays given the Sandown circuit is to undergo upgrades in multiple areas.

Stage 1 is due to be completed in time for this year’s Supercars race with approximately 40 concrete barriers placed behind the Armco fence on the outside of the esses at the end of the back straight while old tyre stacks will also be changed.

The need to re-establish the Armco footings in wet ground and reconstruct tyre walls caused the significant delays to the Sandown races in each of the last two years.

23Red Racing Falcon driver Will Davison says ensuring one of the calendar’s classic endurance races has every chance of running to its full scheduled lap count is important.

“Starting the race earlier is the logical solution but comes with some complications,” he says.

“We’ve been a bit unlucky with the two accidents in the last two years and the wall repairs required, but it would be great if we could start earlier and give ourselves a bit more of a buffer (for weather, Safety Cars and unforeseen delays).

“There’s been big work on improving things at turn six and I can speak from experience when I say that that wall has saved plenty of drivers (Davison had a huge crash in the same spot in a HRT car in 2010).

“They’ve taken measures now to make it not take as long as repair, which is important because safety is absolutely paramount. So the safety aspect is number one, the next step is what we can do to give everyone the best chance of it running 500 kilometres.”

Any changes to the Sandown 500 schedule in future to facilitate an earlier race start would likely require the cutting of a support category race or races on Sunday morning, given the circuit has a 9am curfew with no engines to be permitted to be started before this time.

Waters will share the Monster Ford with David Russell while Stanaway will drive his RABBLE.club Ford alongside 2015 Sandown 500 winner Steve Owen.