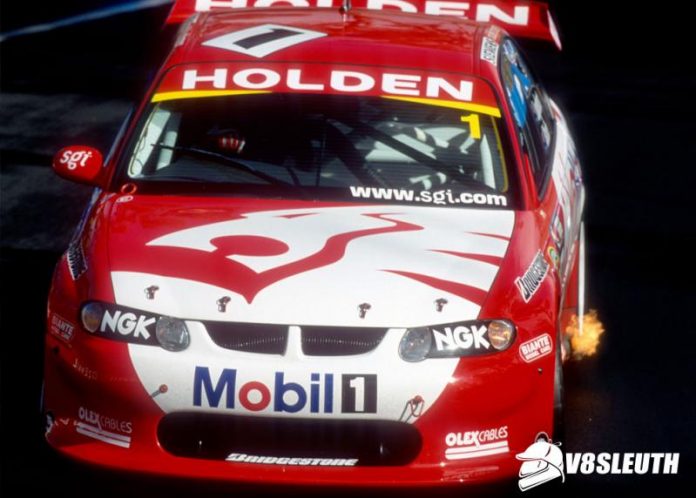 ONE of the only two cars in history to win the Bathurst 1000 twice is soon to come to market – the ex-Holden Racing Team Commodore dubbed the ‘Golden Child’ and driven to multiple victories by V8 Supercar legend Mark Skaife.

The car is part of a giant motorsport memorabilia collection that will be sold by its private collector owner in the near future.

V8 Sleuth has confirmed with a reputable source that indeed the Golden Child will be placed on the market with a multi-million-dollar price tag.

However, it’s understood prospective buyers won’t be able to ‘cherry pick’ the ex-Skaife car and it will only be offered for sale as part of a hugely significant collection of motorsport memorabilia including treasured trophies, helmets, race suits and much more. It also includes a whole host of significant motorcycle and motocross racing memorabilia.

The V8 Sleuth team has been fortunate enough to visit and view this private collection in the past – it’s impressive to say the very least!

The ex-Skaife HRT Commodore, driven to victory at Bathurst in 2001 with Skaife and Tony Longhurst and again in 2002 with Skaife and Jim Richards, comes complete in its 2003 VY-specification and livery and includes a range of historic supporting paperwork.

The change to ‘Project Blueprint’ regulations in V8 Supercars for 2003 meant the ‘Golden Child’ was converted from a VX to VY model.

Despite being a huge architectural change, Skaife rolled out to win the Adelaide 500, running this famous car through to the midpoint of the season when a brand new VY Commodore made its debut.

The two-time Bathurst 1000 winning car then became the team’s spare chassis for the remainder of 2003 and into 2004.

It was put back into active racing service following Jason Plato’s massive accident at Bathurst in the #05 car he was sharing with Peter Brock, which couldn’t be repaired in time for the next round on the Gold Coast in just a fortnight’s time.

In Skaife’s hands (having received special dispensation due to the car still using an 18-degree Chevrolet engine, which teams weren’t allowed to switch back to once they’d moved to the new Holden Motor Sport unit), the car dubbed ‘Golden Child’ qualified on pole on its return to racing, though Skaife later spun out of the lead while being chased by Marcos Ambrose.

Skaife debuted a new Commodore at Symmons Plains, sending 045 back to the workshop to retire from active duty, instead used for pit stop practice by the HRT crew.

It was placed back into its 2003 Clipsal 500 Adelaide-winning VY livery for Skaife’s departure from the Holden Racing Team at the end of 2008 and he retained ownership of this piece of Bathurst history for the best part of the next decade before selling it to its current owner, a private collector based on the east coast of Australia.