Home News ‘SMASH ME UP’: INGALL’S MESSAGE TO COMEBACK CRITICS 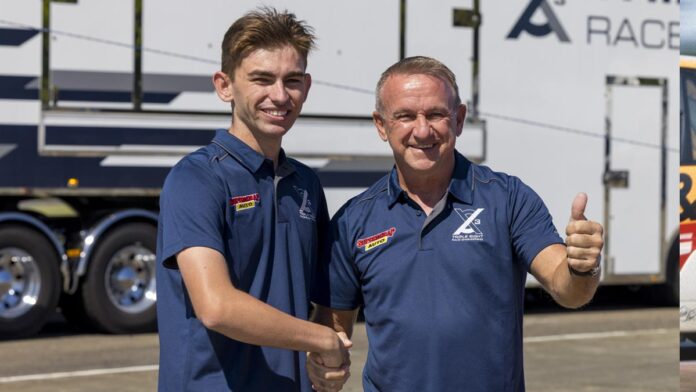 The 57-year-old was this morning confirmed to make a shock Supercars comeback in October’s Repco Bathurst 1000, joining 18-year-old Broc Feeney in a Triple Eight-run wildcard.

OPINION: Why Marcos Ambrose was the star of Symmons Plains

Central to the deal is sponsor Supercheap Auto, who backed Ingall’s Supercars campaigns from 2008-2013 at Paul Morris Motorsports and Walkinshaw Racing.

The two-time Bathurst winner has not raced a Supercar since co-driving with Rick Kelly in the 2016 Enduro Cup and has only made limited appearances in other categories.

However, amid the fanfare of his return announcement Ingall declared it “too good an opportunity to pass up” and was pulling no punches when it came to his motivation.

“I am a very competitive person. I’m going to take it seriously,” he said. “I’m sure the keyboard warriors after this goes out will be on fire for and against, but I encourage it.

“If you want to smash me up, come on, get online, smash me up, because I feed on that sort of stuff… negativity only drives me harder.

“At the same time, I’ll have a big grey army supporting me too. I’m looking forward to it and I will be going out there having a big dip.”

When Ingall was first approached by Triple Eight boss Roland Dane about the wildcard opportunity, he says it took “a couple of days to get my head around it”.

Asked by V8 Sleuth whether he had any self-doubt about being up to the job, Ingall added:

“The only self-doubt was when my wife Julia said to me ‘are you kidding me, what the hell are you doing jumping in a Supercar and going back to Bathurst?’”.

“It took her more to come to grips with it than me.”

Ingall now has six months to prepare himself for the race and says he’s already got drives in other categories locked in, likely to be in everything from Super Trucks to Hyundai Excels.

“If Roland rang me up and the race was next week I’d have said no, because I’ve got to get personally fit and match fit,” Ingall added.

“I’ve got six months to do it. That was all, making sure I’m confident enough I can do a good job, so I don’t let this kid [Feeney] down.

“After I thought ‘nup, I’m pretty sure I can do this’ and I spoke to a few people, Paul Morris was one of them and he said ‘we’re confident you can do it’.

“Roland said the same thing too, so here I am.”

Ingall has Feeney and Triple Eight’s all-star roster of drivers to lean on for The Great Race and didn’t miss the chance to have a swing at his rivals.

“I still believe there are a lot of latte drinkers and lycra wearers amongst the lot of them,” he said of the current driving group.

“I’ve got no drama with that but, the thing is, once I get there and get on the track it’s going to be like I’ve never left.

“A lot of those drivers that are co-drivers and even guys that are in the main game, I was beating them when I was back there, so there’s no reason I can’t beat them now.”