Home News Classic Cars THE LAMBORGHINI NATIONS CUP RACER YOU COULD DRIVE ON THE ROAD! 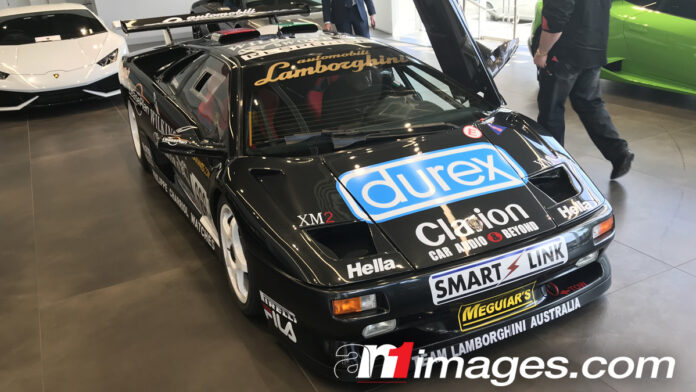 THE Lamborghini Diablo SV-R that Paul Stokell used to rack up a pile of wins in the Australian Nations Cup series is on the market.

Having won the 1998 Lamborghini Super Sport Trophy, the car was imported to Australia for the new Nations Cup series that debuted in 2000.

Stokell drove it in the 2000 and 2001 Nations Cup seasons, claiming victory in its debut race at the Clipsal 500 in Adelaide.

It also claimed victory in the pouring rain later that year at Bathurst and won 18 races in its two years in the Nations Cup.

Stokell finished fourth in the 2000 Nations Cup and runner-up to Jim Richards in the 2001 series.

Stokell and Steven Johnson drove the car in the 2001 Sandown 500, however the coupe was a non-finisher in the Melbourne endurance classic.

With 23,900 kilometres on the clock, the 1996-model SV-R had recently been sold via an online auction, however the sale reportedly fell through when the buyer didn’t come through with the required funds.

The 16th of 31 Super Sport Trophy cars built, the ex-Stokell race car can reportedly be registered for road use under Club Permit in Victoria and Historic/Rare and Unique Permit in Western Australia due to its age.

According to its advertisement on carsales, the Diablo is fully restored to its Stokell #666 period livery, is race ready and comes with full factory new spares for racing and plenty of folders of original paperwork, including race data and setup information.