Home News THE TOP 5 WINNING SUPERCARS OF ALL TIME 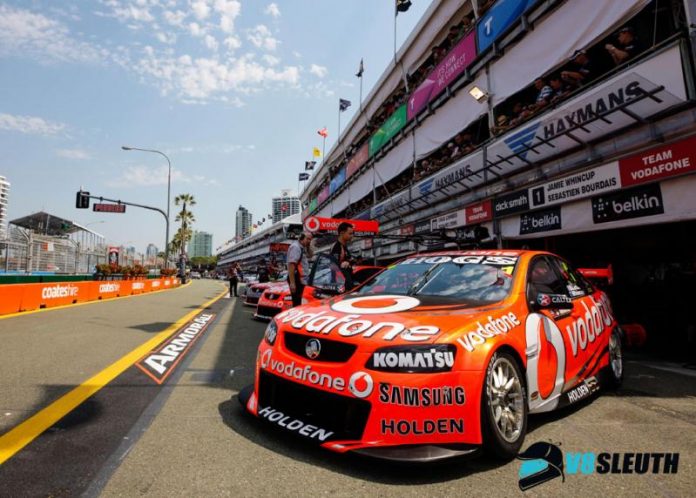 Which Supercar from history has won the most championship races?

WINNING V8 Supercars from history are a popular topic around the V8 Sleuth office and this week we pondered just what have been the top five winning Supercars of all-time.

We did some pondering and some homework and, right up to date heading into this weekend’s Winton SuperSprint, here are the top five winning cars in championship history.

1. 888A-023 – ‘Kate’ – 28 champ race wins
This was the car that Jamie Whincup used to win both the 2011 and 2012 Supercars Championships as well as teaming with Paul Dumbrell to win the 2012 Supercheap Auto Bathurst 1000. A VE Commodore first built in 2010, this Triple Eight machine clocked up plenty of big race wins – it’s now retired from racing duties.

2. SBR BA02 – 25 champ race wins
A popular car with Ford fans, this was the BA Falcon that Marcos Ambrose drove to championship wins in 2003 and 2004. It won the ’04 Sandown 500 and also featured in that famous stoush with Greg Murphy at Bathurst in 2005. It was a great Stone Brothers Racing-produced car.

3. 888A-037 – 22 champ race wins
Given there are a high proliferation of races in the Supercars Championship, it’s not too shocking to see a current Car of the Future spec chassis in this list. This car helped Whincup win the 2013 and 2014 championships and he also ran it in 2015. It lives on now in the Super2 Series in the hands of Jake Kostecki.

4. HRT 045 – 20 champ race wins
Mark Skaife’s ‘Golden Child’ has had plenty of column inches devoted to it over the years. It won the Bathurst 1000 in both 2001 and 2002 and also helped steer Skaife to the championship in each of those seasons. It’s a famous Holden Racing Team car, nicknamed as such by Skaife’s long-time manager, former Collingwood AFL Premiership player Craig Kelly.

5. HRT 041 – 16 champ race wins
A bit of a surprise on the list but this car did its winning in the red colours of the factory Holden Racing Team and the white, blue and red of Kmart Racing. It started life in Mark Skaife’s hands in 1999 and was run by Craig Lowndes, Jason Bright and Greg Murphy to various wins.