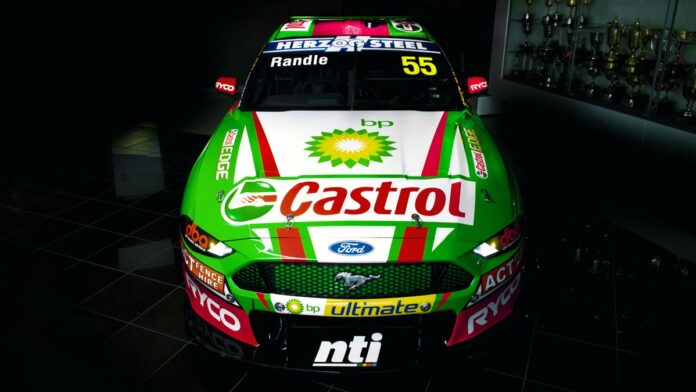 THOMAS Randle will race in the famous colours of Castrol during his rookie Repco Supercars Championship campaign with Tickford Racing in 2022.

The team has pulled the covers off the first race livery for the 2022 season at Mount Panorama ahead of this weekend’s Repco Bathurst 1000.

NEWS: Winterbottom’s title-winner up for auction

Randle is making a belated step-up to the main game after a Racing Entitlements Contract shortage kept him off the 2021 grid.

The 2020 Super2 Series winner had to settle for selected Supercars wildcards in a Castrol-backed Tickford entry this year, alongside a co-drive with James Courtney in the Great Race.

Tickford’s purchase in June of a fourth REC locked in Randle’s place in the 2022 field, and today’s announcement confirms the return to a full-time Castrol-backed car.

Those to have previously raced Castrol Supercars full-time include the likes of Larry Perkins, Russell Ingall, Greg Murphy, Steven Richards and Rick Kelly.

“It’s surreal to see my name on the window of the green machine, and to join the list of Castrol Racing drivers is an amazing honour,” said Randle.

“Castrol has been an instrumental part of so many historic moments in Australian motorsport, and we definitely want to create our own in the years to come.”

The latest deal continues a partnership between Castrol and the now Tickford Racing team that started in 2003, when Ford Performance Racing was born.

“Castrol is one of our ‘day one’ partners and we’ve enjoyed quite a bit of success together since our inception,” said team principal Tim Edwards.

“Every win, pole, and podium we have ever achieved has been with Castrol oil in our cars, which is something we’re very proud of.

“Our relationship has taken on many guises over the years, but we are thrilled to grow our partnership to a naming rights arrangement for 2022, especially in support of a young and rising star in Thomas.

“We have lofty goals for the future as we always do, and with Castrol’s continued support we look forward to going after those goals with Thomas and celebrating more success together.”

Practice for Sunday’s Repco Bathurst 1000 gets underway at Mount Panorama this morning.