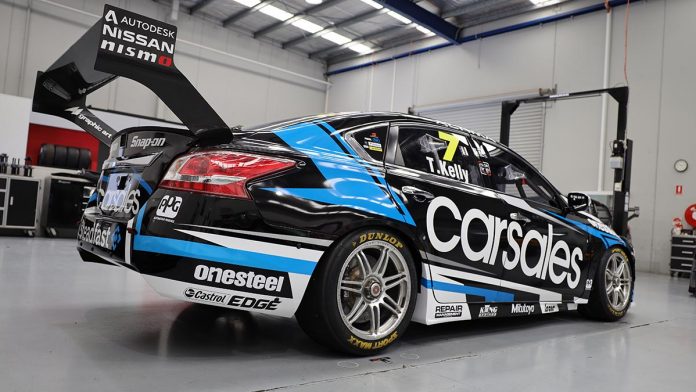 The seventh Nissan Altima Supercar built by Kelly Racing, KR007 had been run by Todd during what turned out to be his swansong season in 2017.

It was passed to new recruit Andre Heimgartner for 2018 and ’19 and then retained by the squad amid its shift to Ford Mustangs.

Although KR was initially hoping to campaign KR007 in the 2020 Dunlop Super2 Series, the car instead sat idle, and has now been returned to Kelly’s 2016 Carsales colours.

The team did not choose to recreate the ‘retro’ tribute livery it sported in the 2017 Newcastle finale, but its mechanicals are very much how it was raced that weekend.

“This is exactly how it was run,” said Kelly in a team video.

Kelly says that are not set plans for the car but hopes to drive it again at some stage.

“In the next year or two, if there’s an opportunity to take it down to a track day and have a drive, I’d certainly love to do that,” he said.

“Even something as simple as putting my kids in the car and doing a few slow laps with them to show them what I used to do when they were younger!”

The team is now also refurbishing another Altima it has remaining in its fleet, chassis KR005.

That car was driven by Michael Caruso from 2015-17, before spending the next two seasons in Simona De Silvestro’s hands, wearing the colours of Harvey Norman.

“This was stripped back to a complete bare shell and it’s having a full, ground-up rebuild. It will go back together,” said Kelly of KR005.

“We’ll either run that in Super2 next year or we may put it up for sale. The main thing is just getting the car completed instead of lying all over the place in bits.”

KR converted another of its 2019 Altimas, KR009, into the Mustang that Andre Heimgartner raced this year.

Several of the team’s other Nissans are now with Dunlop Super2 Series team MW Motorsport, while one chassis was written off after an accident in 2017.