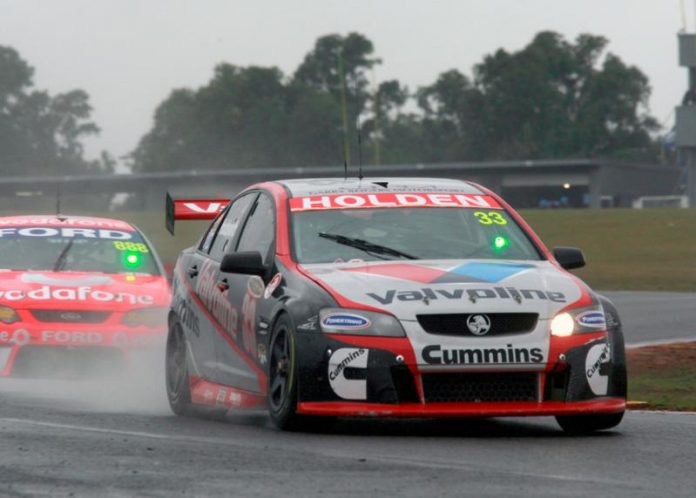 THE car that took Lee Holdsworth to his first-ever win in the Supercars Championship at Oran Park in 2007 is returning to the track later this month in the Kumho Tyre V8 Touring Car Series – complete with period Valvoline/Garry Rogers Motorsport livery.

Former Kumho Series champion and long-time Super2 campaigner Adam Wallis will return the ex-GRM VE Commodore to competition duties for the final round of the Kumho Series at The Bend Motorsport Park in South Australia later this month.

Wallis acquired the car back in 2011 and last raced it at the Adelaide round of the Dunlop Series in 2016. The Bend will mark its debut in the Kumho Series.

Wallis had the car returned to its original GRM Valvoline livery earlier this year by Neville ‘Brushes’ Bolton, who did the original sign writing on the car for GRM.

Wallis gave the car its first public appearance in its restored colours at the Adelaide 500 this year as part of the 20thyear celebrations of the Adelaide event.

The Commodore originally debuted at the Queensland Raceway round of the championship in 2007 in Holdsworth’s hands, however it’s probably best remembered for taking the then 24-year-old to his maiden V8 Supercar round and race victory just a few weeks later at a very wet Oran Park.

Dean Canto joined Holdsworth for the endurance races that year with the car suffering major damage in a race-ending accident at Bathurst with Canto at the wheel.

The car was promptly repaired and used for the remainder of the ’07 season and ran again throughout 2008. GRM last used the car in the non-championship races at Albert Park in 2009 after Michael Caruso damaged his regular chassis at the Clipsal 500.

The chassis remained as a spare until purchased by Wallis.

The South Australian will strap into the Commodore when the Kumho Series comes to its conclusion at The Bend Motorsport Park on August 24-26 alongside the Virgin Australia Supercars Championship.

V8 Sleuth is proud to again partner with the Kumho Tyre V8 Touring Car Series in 2018 – click here to view more information on the series including results, driver information and more.