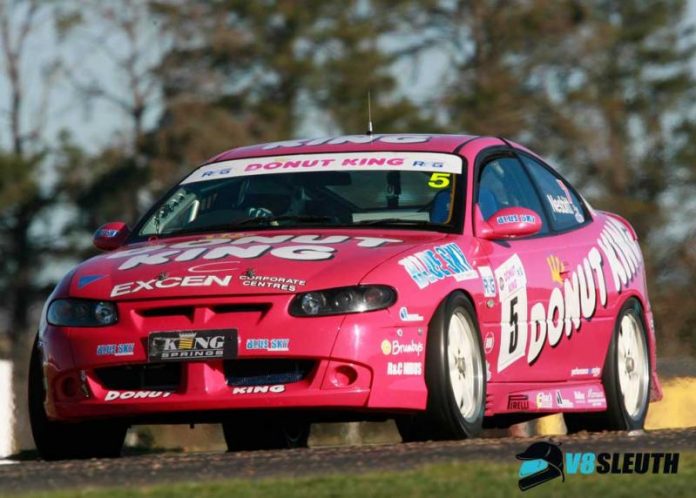 THE days of the Australian Performance Car Championship from a decade ago have come flooding back to us here in the V8 Sleuth offices with one of its former front-running cars hitting the market via V8 Sleuth’s Online Showroom page.

One of a pair of Donut King Racing Team’s VY HSV Coupe GTOs that competed in the production-based series a decade or so ago, the recently listed car has lay idle for the best part of the last seven years.

Originally built by the Monaro Performance Centre and powered by a 5.7-litre V8, the car was acquired by current owner Chris Westman seven years ago from Formula Tech Dyno Centre, Walkinshaw Performance in Perth, Western Australia.

After originally planning to outfit the car for tarmac rallies, Westman has been unable to get it back out into competition due to time and work commitments and has made the decision to sell the car.

“The car is in great condition and I really wish I could keep hold of it but it’s a waste to not have this car out on the track,” he says.

Formerly driven by Barrie Nesbitt in Performance Car racing, the car won the Hidden Valley round of the series in 2007 in his hands as well as winning races at Eastern Creek and Symmons Plains (the double points final round).

Check the car out in action here at Oran Park in 2007 with a younger V8 Sleuth Aaron Noonan and Damien White in the commentary box ...

Distinctive in its bright pink Donut King livery, Nesbitt took the car to fifth place in the 2007 championship, which was won by the Lancer of Gary Young.

He also ran the car in the 2005 and 2006 Performance Car championships and in the Albert Park round of the 2009 Australian GT Championship as a production class car.

The Performance Car class was born out of the ashes of the collapse of GT-P in the wake of PROCAR Australia closing down, a range of competitors banding together to get the category back up and running.

It featured the likes of the HSV Coupes and Mitsubishi Lancers battling it out as part of the V8 Supercar Championship support bill and was limited to cars that cost less than $150,000.

All cars competed in the 2007 series on a control Pirelli tyre, with a round held as a support to that year’s Supercheap Auto Bathurst 1000 at Mount Panorama.

We’d be keen to find out where the sister ex-Donut King VY HSV GTO Coupe has ended up too – if you have any information on this, contact the V8 Sleuth office here via email.